The Reedley College One Book/One College project began in fall 2015 in efforts to encourage engagement and discussion amongst students, faculty, and staff. This guide provides information about previous and current titles.

About One Book, One College

Visit One Book, One College!

"The Reedley College One Book/One College project, which began in fall 2015, was initiated by the Student Learning Outcomes Committee as a way to encourage student engagement.  This quickly became a joint effort with other College entities such as the Literary Arts/Speakers Series, Student Body Government, English, Library, Honors and Art programs, First Year Experience (FYE), Basic Skills Initiative (BSI), Equity Plan, and the Office of the President.
Many instructors incorporate the One Book into their courses and/or encourage students to participate in a series of free events to encourage college-wide conversation, creativity, and community. Be sure to check here regularly as new events and activities are added regularly."
Shared from the Reedley College One Book, One College web page

Why One Book, One College?

“This shared reading experience encourages Reedley College students, staff, and faculty to read and discuss a common book during each academic year with the goal to engage students in dialogue and events in order to enhance student success. Thoughtful, intellectual engagement takes place among students, faculty, and staff.  We encourage the practice of reading and to use this reading experience to communicate and connect beyond the classroom and workplace.

Did you Know? College and community One Book programs have been established nationwide to promote literacy and to engage all members of a given community in a lively, intellectual conversation based on their shared reading experience."

Shared from the Reedley College One Book, One College web page 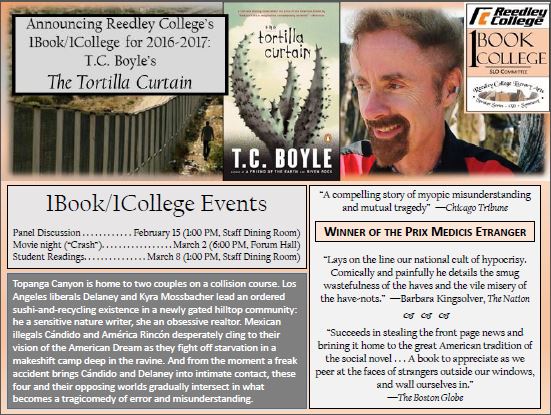 The T.C. Boyle Lecture was a great success! 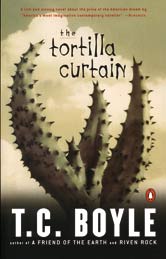 "The story of illegal aliens in California, told through the eyes of two very different couples, one well-off Anglos, the other illegal Mexicans living in a canyon. The novel chronicles their relationship against the background of growing hostility between immigrants and natives."

From his website, "T. Coraghessan Boyle is the author of twenty-six books of fiction  [sic].He received a Ph.D. degree in Nineteenth Century British Literature from the University of Iowa in 1977, his M.F.A. from the University of Iowa Writers' Workshop in 1974, and his B.A. in English and History from SUNY Potsdam in 1968. He has been a member of the English Department at the University of Southern California since 1978, where he is Distinguished Professor of English.  His work has been translated into more than two dozen foreign languages, including German, French, Italian, Dutch, Portuguese, Spanish, Russian, Hebrew, Korean, Japanese, Danish, Swedish, Norwegian, Lithuanian, Latvian, Polish, Hungarian, Bulgarian, Finnish, Farsi, Croatian, Turkish, Albanian, Vietnamese, Serbian and Slovene.

His stories have appeared in most of the major American magazines, including The New Yorker, Harper's, Esquire, The Atlantic Monthly, Playboy, The Paris Review, GQ, Antaeus, Granta and McSweeney's, and he has been the recipient of a number of literary awards, including the PEN/Faulkner Prise for best novel of the year (World's End, 1988); the PEN/Malamud Prize in the short story (T.C. Boyle Stories, 1999); and the Prix Médicis Étranger for best foreign novel in France (The Tortilla Curtain, 1997)."

Other Titles by T.C. Boyle